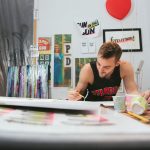 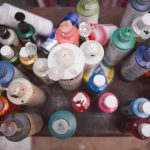 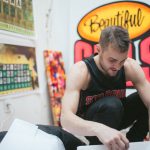 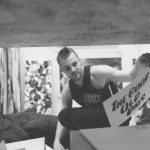 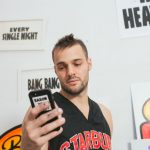 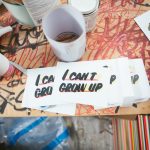 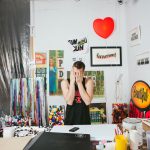 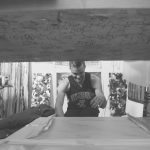 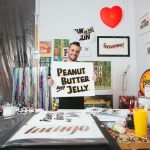 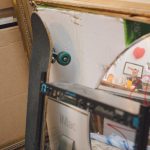 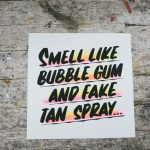 IT’S A BRISK FALL AFTERNOON in the well-appointed lobby of the Bowery Hotel and artist Baron Von Fancy (born Gordon Stevenson) goes virtually unnoticed as he prepares to demonstrate how to cat walk. “I walk like a cat or a spider when I workout,” Stevenson says matter-of-factly while averting the stares of nearby patrons. “People will walk by and look at you when you’re doing it. They can’t comprehend how it’s good for you so they think you’re weird.” Instead of descending onto all fours, Stevenson settles into his club soda and lime and the other guests like model Cara Delvigne don’t bat an eyelash. Stevenson has recently become somewhat of an art star among certain circles thanks to his flashy, neon-sprayed paintings that read witty double entendres like “All night wrong,” and “She’s a babe in the woods.” The bright works–which read one part nostalgic and one part millennial–act as an ode to retro sign painting that you might see at the supermarket, a nod to Stevenson’s upbringing in Manhattan. “I remember going to the grocery store as a kid and seeing a sign that read “Mangos 3 for $1.00,” recalls Stevenson, certainly looking the part of downtown artist in a baggy inside out Polo sweatshirt and unlaced Timberland boots. “I loved how simple but effective it was.” His works recently caught the eye of Colette, which debuted at the Paris high concept shop last winter and he’s collaborated with cult labels like Reformation–even mega brands including Juicy Couture and Porsche have come calling. Even the Lower East Side institution Katz’ Delicatessen commissioned Mr. Stevenson to create a pop-up wall mural next door to the hallowed eatery that read, “I’ll have what she’s having,”–a nod to the classic rom com Harry Met Sally. But today the artist waxed poetic on another subject entirely–his health game. Below, Mr. Stevenson reveals some of his lifestyle habits tips, rapidly flitting between topics spanning from prison style/calisthenics workouts to his taste palette to his latest obsession with New York City bike racks. “I just want to be creative every day,” said Stevenson. “I don’t care what it is.”

The artists that inspire me are Ed Ruscha and Stephen Powers. I love what they do with words. I also love Sigmar Polke and Sol LeWitt.

Growing up on the upper east side, you’re close to museums. My mom would take me for ice cream and we would go to the Whitney.

When it comes to my work, the phrase is really important. I don’t care if it’s from a romantic comedy or a Talking Heads quote or if a 5 year-old-kid said it. As long as it appeals to me. I’m not claiming ownership on the phrase, I care about the sentiment.

I don’t consider myself healthy but recently I cut out soda. I used to have eczema my whole life. I’ve seen every head of dermatology in the city. After I cut out soda I don’t have it anymore. This past year I only drink water and seltzer.

I go to Tompkins Square Park four days a week with my friend Sebastian. It’s a traditional prison style/calisthenics workout. One variation of our upper body workout can be done in 12 minutes including 150 pull ups and 150 push-ups, which we alternate as a team. The workout focuses on raising our heart rate while exerting maximum energy for a short period of time. I like the natural high. That’s why they do it in prison. Don’t pick a fight with one of the guys there. They look like me but they would kill someone.

Twitter is my notebook. Instagram has allowed me to show so many more people what I do. I don’t think 15,000 people would ever come to my show if I had it for a week.

I like the concept that neon colors are called fugitive colors. I love that idea of enjoy it while it exists now because it’s not going to look the same in 20 years.

I don’t like being in a gym with a bunch of assholes. I want someone to walk by and be like what are these maniacs doing.

Form is very important. Doing a pull up where you’re cheating isn’t a fucking pull up.

When I’m uptown,  I workout at InForm Fitness. It’s totally different from my workout in the park. It’s like I’m in a Lamaze class. My breathing is totally different. They want you to rest in between workout days, they won’t let you come two days in a row.

When it comes to my personal style, I like anything bright and gold. I used to collect Versace pants and people would call me fancy pants. This was before all the allover prints became so trendy.

I want to be in shape but I don’t want to look like I have a suitcase on my chest. I like focusing on my core and lower body. I don’t want huge arms.

I like word play. I would hope with every image I publicize, people would understand why I put it out.

My father is very healthy. He would never eat something out I the box so maybe that had an influence. My general thoughts on diet is I can’t believe as a country we love anything that is packaged and has sugar. I like the idea of farm to table.

I don’t fuck with fruit. It’s pure sugar. Anyone who drinks a glass of orange juice in the morning is fucking insane. You’re basically drinking sugar water. The drinks that taste awful, that no one likes to drink are probably the most healthy for us. A muffin is basically an undressed cupcake. A strawberry banana smoothie you might as well have a milkshake.

My favorite healthy snack is kefir, I just drink it plain.

I have weird sleeping hours. I wake up early then I work out at InForm Fitness or Tompkins Square Park. During the day I have meetings or I work at my studio. I eat out always.

For lunch I usually get the grilled chicken and lentil soup with quinoa at Siggy’s. I’m really picky. My mom would joke because I’m so particular. I’m like a baby. I don’t like certain textures. I like chicken strips and broccoli. I drink wheatgrass at Siggy’s because I don’t like leafy greens that much.

Since I work out more, I eat more healthily. When I work out in the park I feel more invigorated for the day.  All my friends drink so much. I cannot maintain my workout if I drink.

My guilty pleasure is bread. I love it so much. That and Kit Kat bars. If I’m going to have sugar, it’s going to be the real thing.

The last saying that inspired me was, “Who said romance is dead?”

Once I draw a phrase I don’t do it again. I always collected things like baseball cards so to reprint unlimited amounts just feels dishonest. Someone should own the original.

My dream collaboration is a baby.