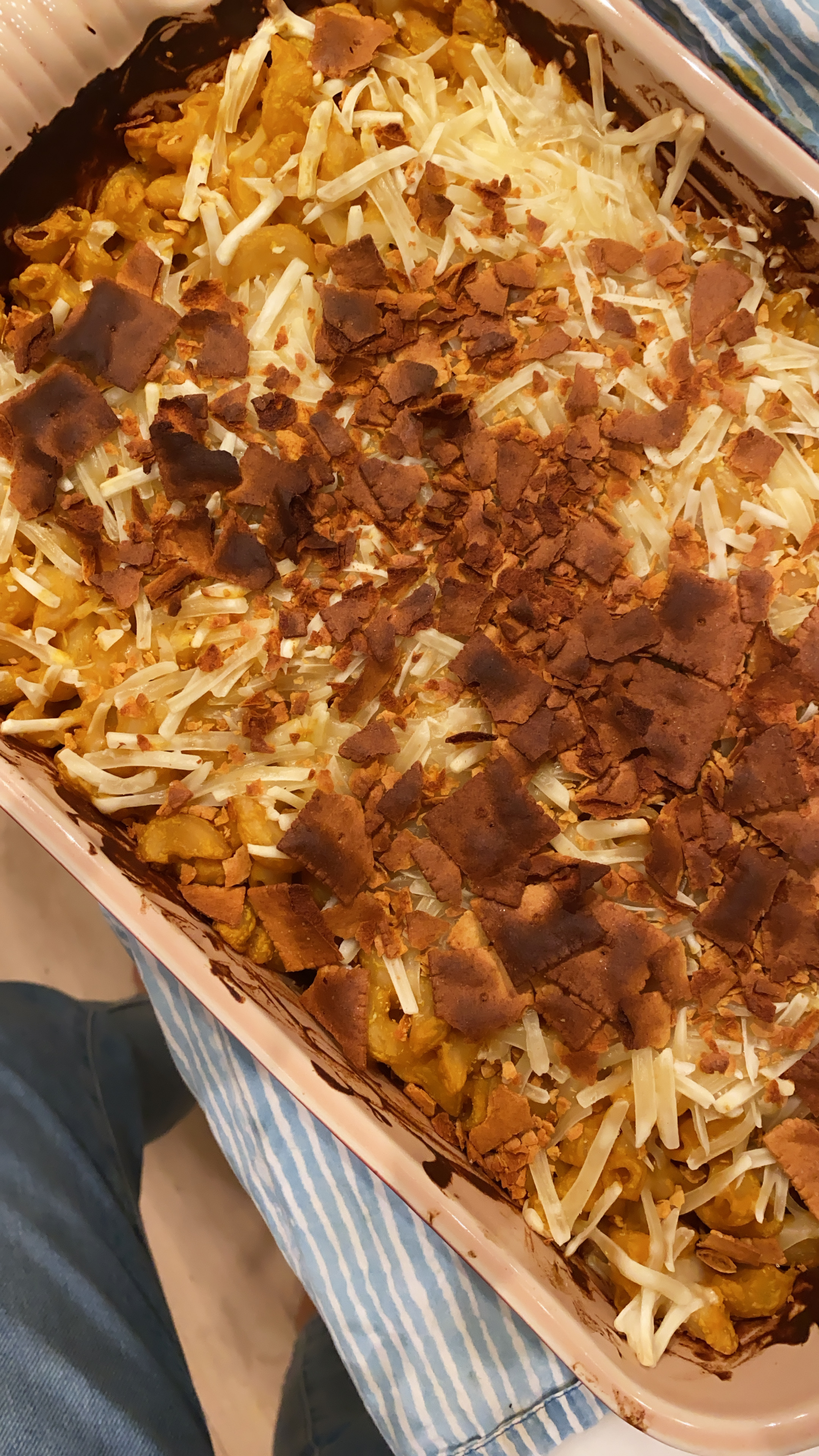 Cook macaroni as directed on box. Strain, rinse with cold water and set aside. Preheat oven to 400. Brush butternut squash cubes w avocado oil. Sprinkle cumin, salt and pepper and massage well so evenly coated. Roast squash for about 25-30 min until tender and browned. Let cool. Steam cauliflower until tender and rough chop. Strain pumpkin seeds and add to blender or food processor with nutritional yeast, paprika, garlic powder, onion powder, tamari, olive oil and salt and pepper (to taste). Blend, slowly adding water until achieving a creamy “velveeta” texture. Adjust taste adding salt and pepper, more yeast or tamari to your liking. Set aside. In a large baking casserole dish. Add cooked pasta and steamed cauliflower and mix. Pour over cheese mixture and mix until pasta and cauliflower are fully coated. Sprinkle over vegan mozzarella. Bake in the oven for about 15-20 minutes, with the last minute on broil to brown the top. Serve! 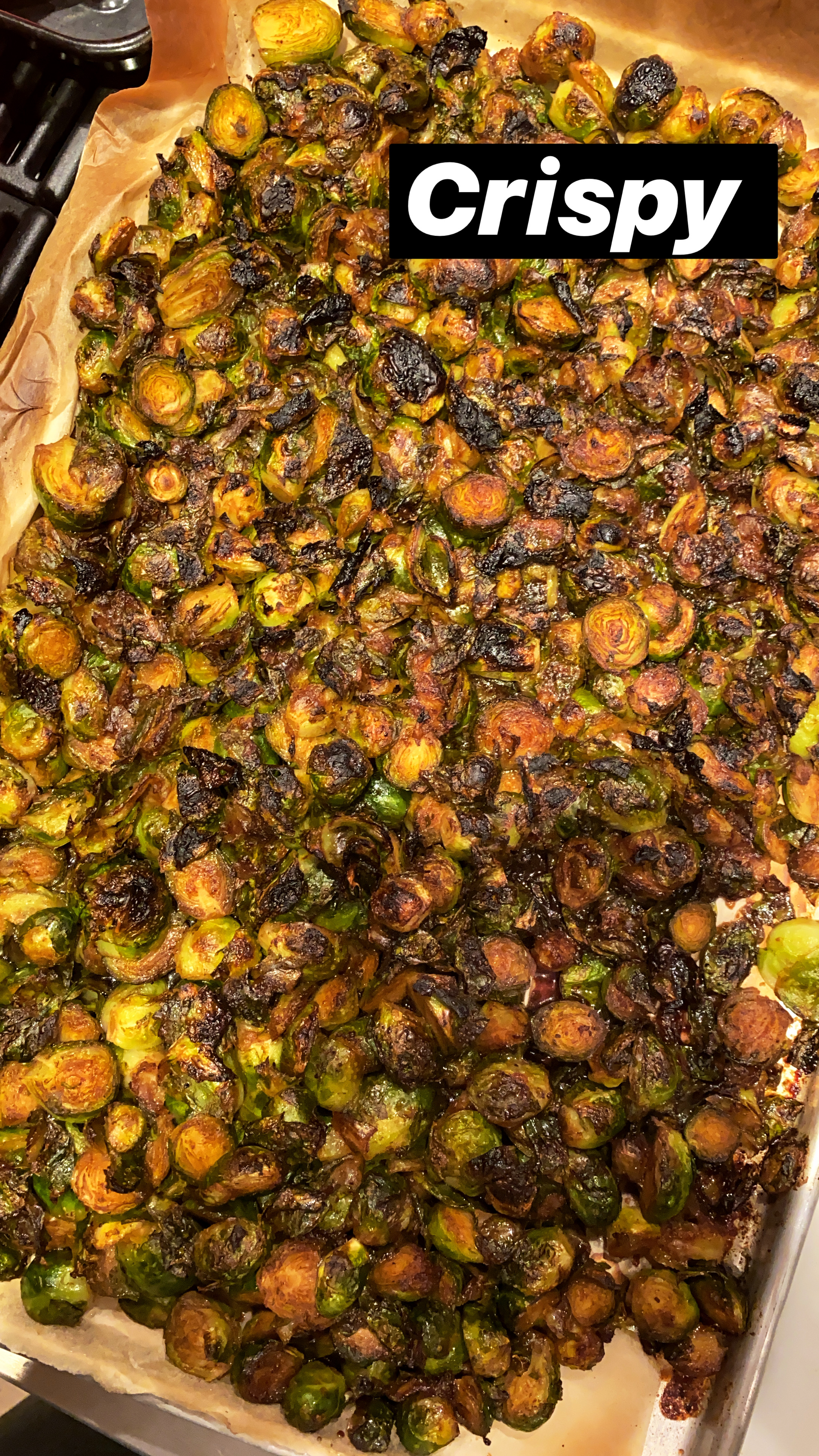 Whisk all dressing ingredients in a small bowl. Pour over Brussels and massage well. Roast at 400 for 30 min or until crispy. 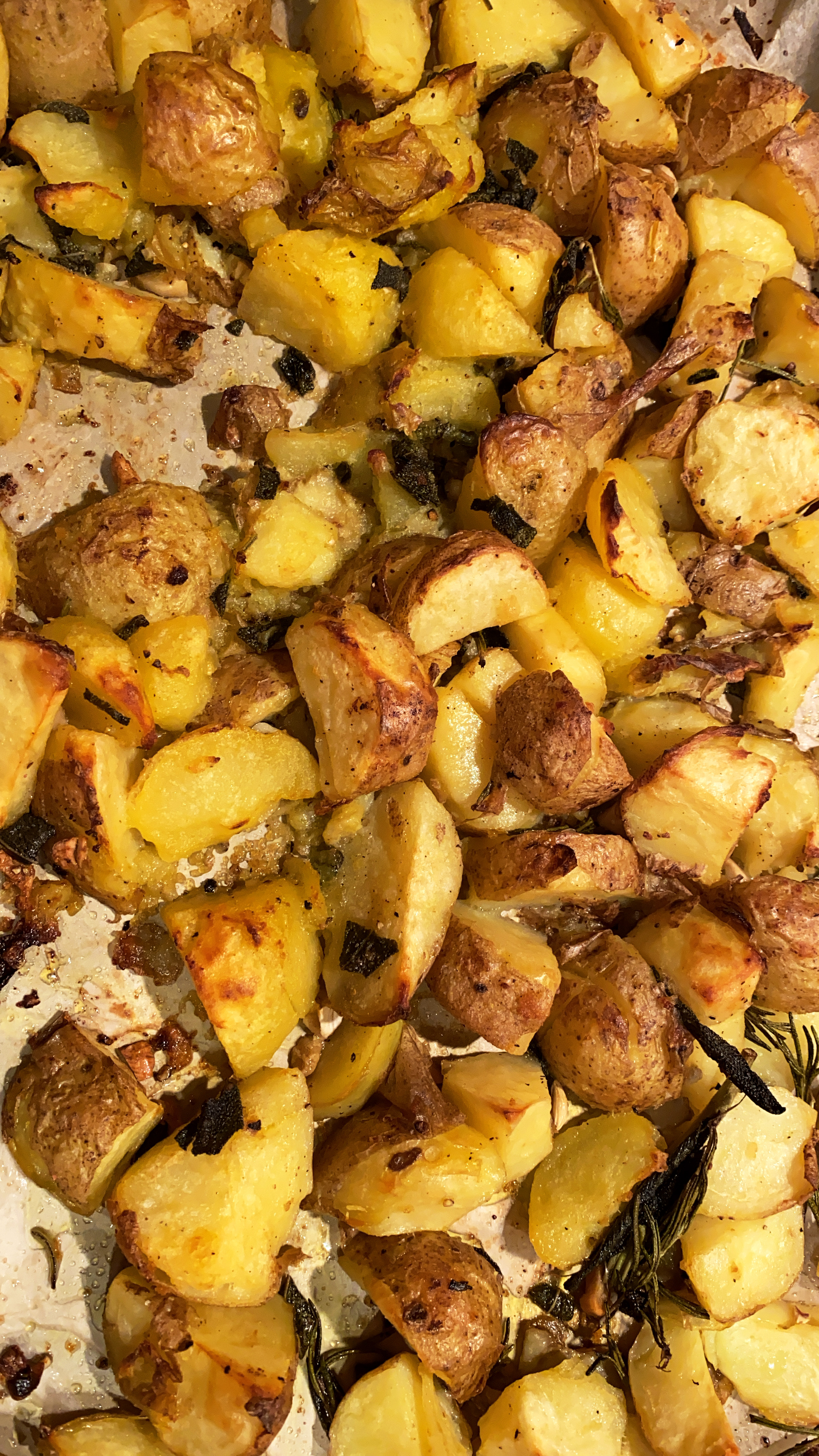 Preheat oven to 425. In a large pot, boil potatoes until tender. Remove from water and let cool. On a flat baking sheet, smash the potatoes, it’s ok if they crumble up a bit those parts will get crispy. Pour over oil, and sprinkle over salt and pepper, garlic and herbs. Squeeze lemons over potatoes. Roast for about 20-25 min until golden brown! 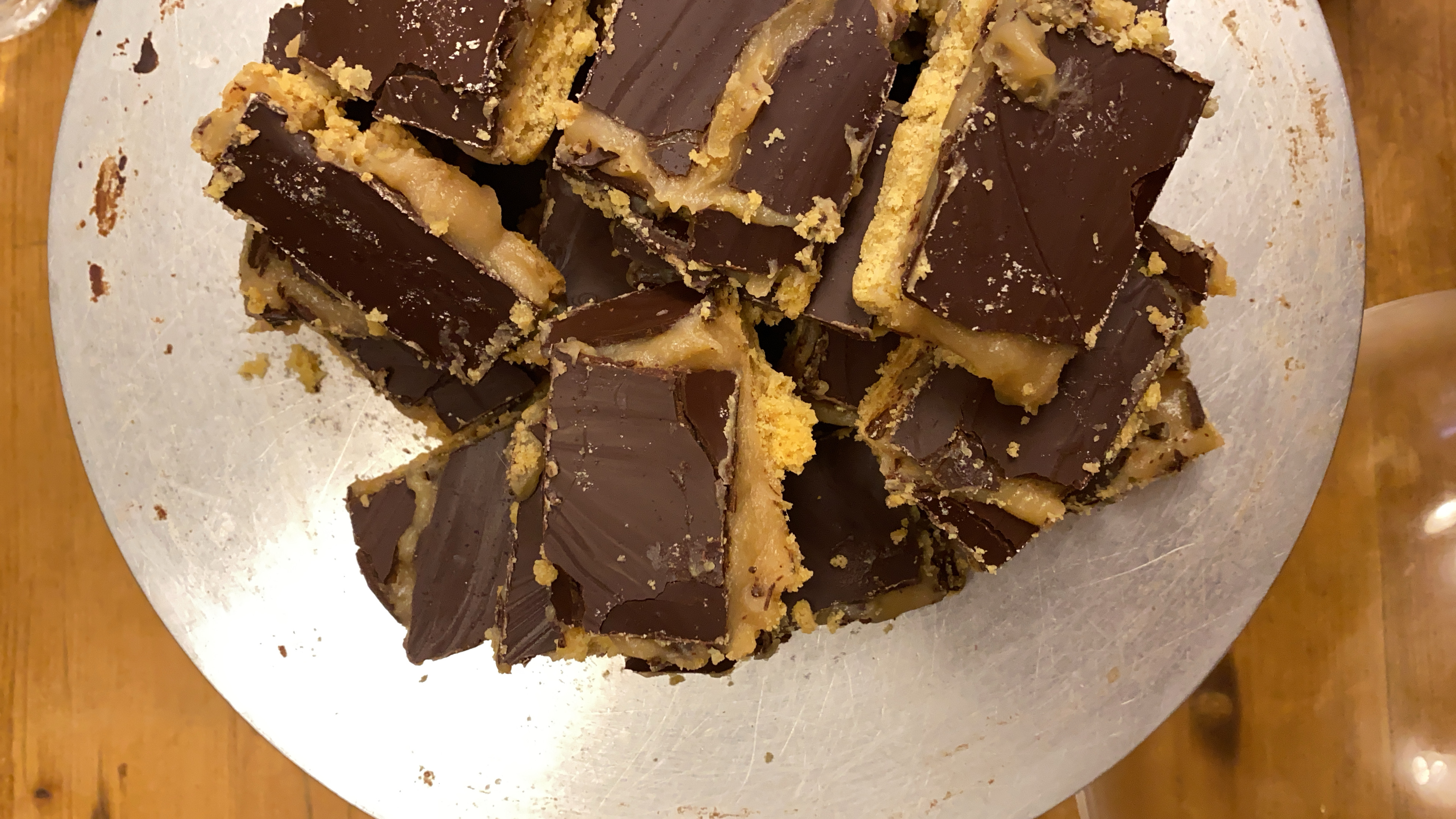 Preheat oven to 300 degrees. Mix together dry ingredients. Mix in butter, rubbing it through fingers until dough resembles sand. Press into buttered and floured pan, bake for 45 mins

Melt all ingredients on stovetop, let come to a boil but stir the whole time!! Let simmer (constantly stirring) for a few minutes until it slightly darkens in color. Pour over cooled shortbread and smooth out. Refrigerate until solid

Melt chocolate and oil together in microwave for 30 second intervals, stirring after each one until melted. Pour over caramel, smooth out. Top with a sprinkling of salt 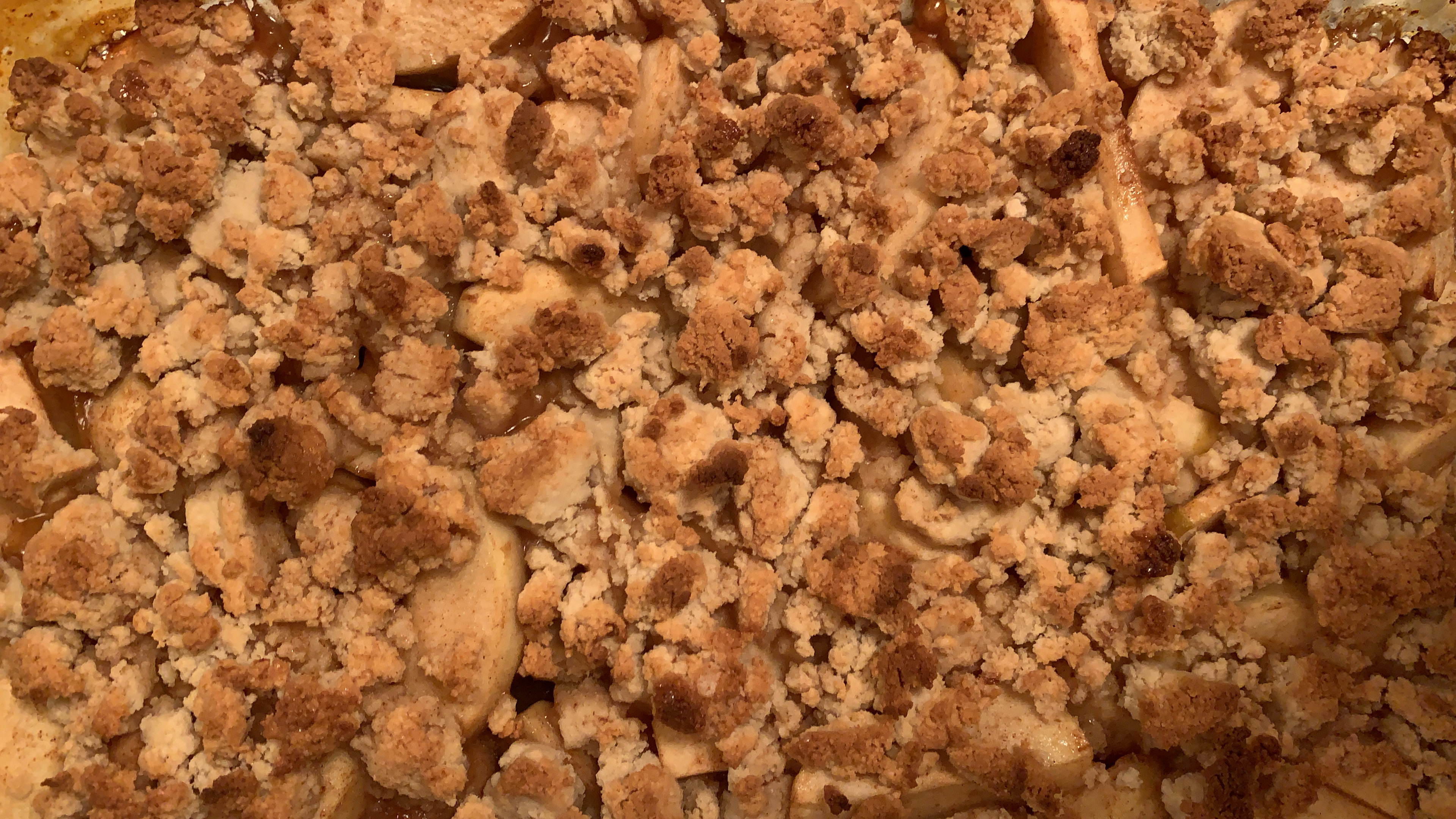 Apple filling: Whisk all ingredients (except the apples) together in a big bowl. Peel and slice the apples into thin slices or cubes. Add the apples to the bowl, and toss well in the liquid mixture and transfer to a baking dish (leave the extra juice in the bowl and SAVE!). Place in the oven for 15-20 min.

While it’s cooking, make your coconut whipped cream. Open your cans of coconut milk and transfer the top part (thickened, hardened cream) into a big mixing bowl – leave the watery milk on the bottom, just use the cream on top. With a hand mixer, mix on high for about 1 min, until whipped and creamy. Add in your maple syrup and vanilla (and if you want…a small splash of the apple juice liquid!). Add more maple syrup for desired sweetness. Once done, place in the fridge.