“FOOD IS A NATURAL HEALER AND SO MUCH OF MY BOOK WAS ABOUT HEALING,” SAYS WRITER JESSICA SOFFER FROM THE LIGHT-FLOODED KITCHEN OF HER HOME NESTLED IN THE WOODED HILLS OF AMAGANSETT. To wit, Soffer’s critically-lauded debut novel, Tomorrow, There Will Be Apricots weaves a tale of an unlikely bond formed between two women during cooking class, specifically over exotic delicacies like cardamom pistachio cookies and baklava. “Food was so much a part of my childhood,” continues Soffer, who grew up in New York City and decamped to the East End with her husband in 2013. “Aside from family and friendships, there are certain gaps that can only bridged through food because it’s wordless.” When not working on her next tome, Soffer (who currently teaches fiction and food writing at Connecticut College and Stony Brook University) channels her artistic sensibilities in the kitchen. Cases in point: adding cinnamon to greens, making smoked fish dip from her husband’s fresh catch or figuring out what to do with the extra romaine in her CSA box (see below). We spent an afternoon with the author who revealed how to be a lazy locavore, her favorite writing snacks and what makes a quality hummus.

When did you discover food not only as a nutrition source but as a healer?
Growing up, I was always aware of what food could do. I never had anything processed. My dad is an Iraqi Jew. He grew up in Baghdad and his mother was a healer. He grew up with this awareness of eating to nourish your body. Iraqi Jews had very specific ways of eating. They believed in eating certain things after you give birth, to encourage happiness, to encourage love, to encourage regeneration of cells. They didn’t know the science behind it, but they believed in eating by color. They thought you should eat yellow and orange foods to encourage happiness and green foods to encourage prosperity. Now we know that vitamin C is a natural Prozac but for them it was intuitive.

Is the Iraqi Jew cuisine plant-based, would you say?
Yes, to a certain extent. They had to kill their own animals. When my dad was a kid, his mom used to cook a chicken once a week. She would smoke it and roast it outside under a pillow as a way to keep the juices in. The favorite child would get the pillow to sleep with for the next week. It’s such a beautiful food memory to think of a child sleeping with a chicken pillow and feeling so loved.

What dishes do you find the most nourishing and comforting?
Roasted vegetables with any kind of tahini situation and dals are beautiful. I’ve also gotten really into congee lately, just slow-cooking the shit out of it.

Do you like to entertain or cook for freinds?
I have a lot of pregnant friends right now and friends with newborns so I’ve been feeding a lot of people lately. I’ve been thinking about the particular foods that really nourish and soothe. It boggles my mind how little some people know about how to nourish themselves. My philosophy on eating while you’re pregnant is you have a nine month moment to just not be an asshole.

You mentioned tahini. What do you think makes a good hummus?
Good quality tahini and a lot of lemon. Also, blending it with olive oil.

How did moving away from the city change your approach to food and cooking?
My whole life changed. We were Seamless people like everybody else. It was more expensive to cook in the city than to take out. But out here, there’s such an incredible bounty. Most places close in the winter so all of a sudden it becomes a very different food life.

Is it more challenging without the convenience of the city?
The grocery closes at six and then you’re done. So I’ve become an everything-in-the-pantry-and-refrigerator kind of person. It’s about high quality to a certain extent, but also about, you get what you get. It’s part of the challenge and the joy.

Where do you get your produce?
We joined a CSA. I knew how to cook but I didn’t cook that much. All of the sudden, I had to figure things out or this kale was going to die. I was putting kale in cocktails. It all shifted quickly and there’s been no turning back.

For readers who don’t know, what is a CSA?
Community Supported Agriculture. It’s a way for farms to have a consistent clientele who bi-weekly will get a box full of the local bounty. In certain cases, you have a say in what you get. At Bhumi Farms, for example, you can be selective about what you get, so it’s nice. For the most part, you get what you’re given and you have to figure it out. But you learn. I had no idea about what grew when and I’ve learned about so many new greens.

Like what?
Like lamb’s quarters. I had no idea those existed. One of my new favorite things is stir-frying romaine in ghee and throwing a lot of chili powder and turmeric in there. Holy balls, it’s good.

What are a few things readers can do to eat local?
1. Grow an herb garden on your fire escape.

2. Meet your meat guy–whether that’s a fisherman or your local butcher. Just figure out where this stuff is coming from.

3. Do Meatless Mondays. It requires some thought so you can guarantee that your brain is working at least once during the week.

What cookbooks are you constantly revisiting in your life?
For me, cookbooks are inspirational. I’m not a huge recipe follower. The Eat Taste Heal cookbook is Ayurvedic so it can be a little intense and overwhelming but the recipes are beautiful and very clean. I love Nopi but I’ve never cooked anything from it. I believe that Ina Garten knows what she’s talking about. And I go back to The Joy of Cooking when I don’t know what I’m doing, which is a lot of the time.

When you’re writing, what are your favorite writing snacks?
This past winter all I did was work on my book and everything else shut down. Writing can be a very lonely process and you grab onto anything you can. I just sat and ate Japanese sweet potatoes like it was my job. For me, there’s no discerning between one and twelve Japanese sweet potatoes.

How do you stay healthy when you’re in the writing zone?
Writing is sedentary and I tend to work best when I just buckle down for hours. Its terrible for my joints, but sometimes the writing requires it. I’m not about to fuck up the writing because of my food habits.

Take me through a day in the life.
Now that I’m in an editing mode and getting my groove back, I pretty much eat raw all day and then do a big dinner. I’ll have three juices before 2 P.M. and fruit throughout the day. The juices are just taking advantage of local produce. For a while, and Meg [Huylo, of Bhumi Farm] inspired this. I was doing fennel, zucchini, peach and lemon. It was amazing. I’ll do pretty much raw until 2 P.M. or 3 P.M., and then I’ll do a piece of toast and almond butter. Then a big dinner, which usually involves a grain, avocado and eggs. I’m pretty consistent that way.

How has your own body changed since primarily eating locally?
Your body becomes as discerning as you become. You start to think about the way food affects you and then the food actually does affect you. When you start eating bad quality food, you see it immediately, which is actually amazing because it means your body is working. And just being able to say that I know my farmers, I know who caught my fish, it’s totally rad.

How would you describe your philosophy when it comes to eating?
Think. You have to think. People eat so mindlessly and they have no sense of where the food is coming from and what it does to our bodies. My best friend just gave birth and I was there from the time the baby was five days old to ten days old, and we watched him grow. The only way that a baby can grow is with food. So you have to listen to that and honor that.

Is there a certain type of cuisine that you haven’t tackled yet?
I’d like to get better at Indian. Having a spice box that is passed down from generations before is such a beautiful practice.

What are your favorite farm stands and vendors in your area?
Bhumi Farms is amazing–they’re the only fully organic farm east of Watermill. I go to Provisions a lot. Mecox Dairy has amazing dairy. There’s a new beauty store in Amagansett called Botanica Bazaar that’s lovely. Brendan Davison has a micro greens farm called Good Water Farms that I really love out here.

What do you miss about the city?
The dentist, Russ and Daughters and good nails. 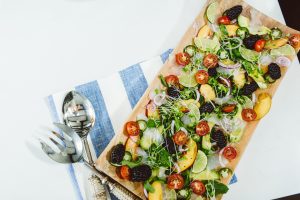 This recipe relies on whatever is fresh. I like to serve it with plenty of bright cocktails to people you love.